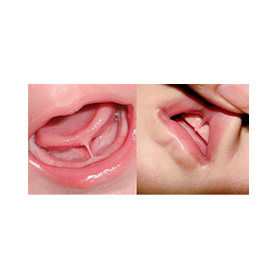 Tongue-tie is a birth defect that occurs when the strip of skin (lingual frenulum) that connects a baby’s tongue to the floor of the mouth is shorter than usual. Typically, this strip of skin separates before birth, which allows the tongue free range of motion. With tongue-tie, the lingual frenulum remains attached to the bottom of the tongue.

Tongue-tie is a very common condition that, if addressed quickly, will not hinder a child’s development. However, if left untreated, tongue-tie can result in malnourishment, speech difficulties, or poor oral hygiene.

Signs of Tongue-Tie Include:

The treatment of tongue-tie for infants is a simple surgical procedure called a frenotomy. The doctor examines the lingual frenulum and then uses sterile scissors or laser to snip the frenulum free.

Stitches are usually not necessary. Since there are few nerve endings or blood vessels in the lingual frenulum, only a local anesthetic is used.

Frenotomy for tongue-tie in older children and adults is similar to that for infants, although it is usually done under general anesthesia and may involve stitches. Speech therapy may also be necessary.

A tight upper lip frenulum attachment may compromise full-lip flanging. This can result in a shallow latch during breastfeeding.

In addition, the tight upper lip may trap milk, resulting in constant contact of milk to the front of teeth that can possibly lead to dental decay. A future diastema (gap between the teeth) may also occur.

Difficulty breastfeeding is one of the most common indications that your infant may have a lip-tie or tongue-tie. The symptoms include:

If a child has lip-tie and you’re a breastfeeding mother, you may experience:

This issue can generally be corrected by a simple procedure done with our soft-tissue laser. A soft-tissue laser does NOT cut; it is more a “vaporization” of tissue that occurs with light energy.

There is very little discomfort with the laser. There is almost no bleeding. Lasers sterilize at touch and therefore result in less risk of infection. The healing is very quick; a laser stimulates bio-regeneration and healing.